In this article, we show how energy consumption data can be used to obtain information about the business dynamism in the country. Typically, one would use information from Fundempresa (1) to understand what is going on with the business sector, but Fundempresa only includes the most formal enterprises, which comprise a low percentage of the total (2), and the data is only available at the departmental level.

There are several ways to evaluate business dynamism through energy-consumption micro-data. The simplest way, and the equivalent of what we have shown in an article about population dynamics, is to identify where the largest number of electricity meters are being installed under the business category, that also have positive electricity consumption (suggesting active companies). Figure 1 shows the 25 municipalities that have added the largest number of business electricity meters (with positive electricity consumption) between 2013 and 2016.

The metropolitan area of La Paz (in red), led by El Alto, increased an average of 2,350 business meters per year during the period between 2013-2016. In the Santa Cruz metropolitan area, only Santa Cruz de la Sierra reached the list of the 25 municipalities with the highest increase in the number of business meters, with an average of 1,100 per year.

Figure 1: The 25 municipalities with the highest increases in the number of business electricity meters with positive consumption, 2013-2016 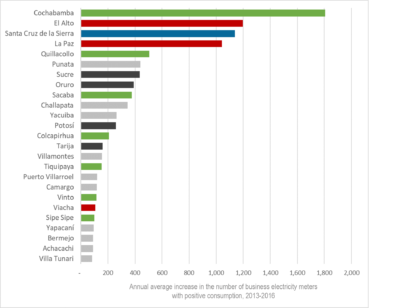 The size of the company behind each business meter can vary between regions, so it is also interesting to see the increase in the amount of electricity consumption of companies in each municipality.

From this perspective, the metropolitan area of Cochabamba falls into second place, increasing approximately 53 GWh annually. And the Metropolitan area of La Paz proves to grow much slower, with an increase of only 8 GWh per year.

Figure 2: The 25 municipalities with the highest increase in the consumption of electricity in the business category (excluding mining), 2013-2016 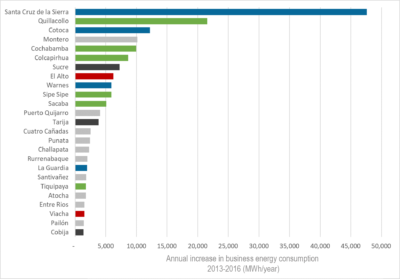 Electricity-using companies mainly belong to the tertiary sector (services and trade) in urban areas, while agricultural oriented companies and the transport sector tend to use diesel as its main source of energy.

Figure 3 shows the 25 municipalities with the largest increases in the expenditure of diesel oil between 2016 and 2018. The city of El Alto stands out with an increase of more than 30 million liters per year; almost four times greater than the second municipality (Camiri). The metropolitan area of Cochabamba almost does not register on this list (only the municipality of Sipe Sipe). Intermediate municipalities are much more prominent on this list. From higher to lower increase in diesel oil sales, we observe the following municipalities: Camiri, Quillacollo, Caranavi, Cuatro Cañadas, Mineros, Rurrenabaque, Riberalta, Uyuni, Puerto Suarez, Villa Tunari, Colomi, El Puente (Santa Cruz), Pailón, San José de Chiquitos, San Julián, San Antonio de Lomerío, y San Borja.

Figure 3: The 25 municipalities with the highest increases in diesel oil sales between 2016 and 2018 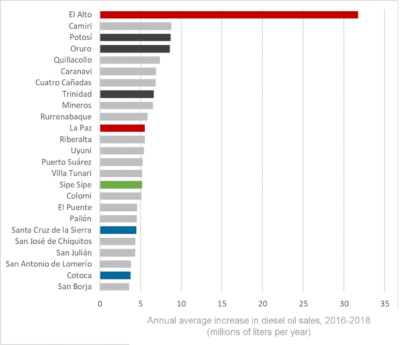 Source: Andersen, Branisa & Calderón (2019), based on data provided by ANH.

The consumption of gasoline is not as closely related to business activities because it is mainly used to fuel private cars. However, municipalities where car ownership is increasing rapidly, probably suggests the presence of successful entrepreneurs and employees.

Figure 4 again highlights the huge increase in the sales of fuels in El Alto. On average, between 2016 and 2018 the sales of gasoline increased by 39 million liters per year.

Figure 4: The 25 municipalities with the highest increases in the sales of gasoline between 2016 and 2018 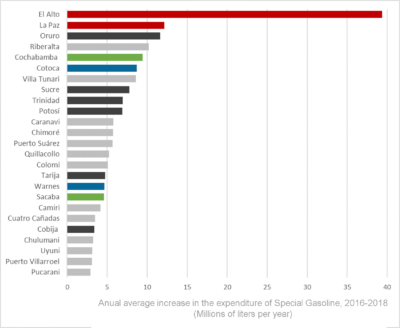 Source: Andersen, Branisa & Calderón (2019), based on data provided by ANH.

The preceding four figures illustrate different types of business dynamics in different parts of the country, and it is difficult to summarize. However, El Alto is indisputably the municipality with most business dynamism in Bolivia, as it appears in all four figures, and if not first, it is at least in a very high position. The only other municipality that appears in all four figures is Quillacollo, which is located in the metropolitan area of Cochabamba. 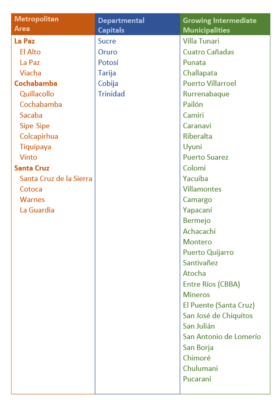 Figure 5: Map of the 53 municipalities with the highest business dynamism in Bolivia, 2013-2018 (the municipalities appearing at least once in the previous four figures).

Some preliminary conclusions that arise from this data:

(1) Fundempresa is the institution where all privately owned companies ought to register in Bolivia.

(2) Bolivia ranked second, after Georgia, in the IMF’s global shadow economy ranking (158 countries) that took into account data between 1991 and 2015. Bolivia’s  average informal economic activity is as high as 62.28% according to the Working Paper published in 2018.

The viewpoints expressed in the blog are the responsibility of the authors and do not necessarily reflect the position of their institutions. These posts are part of the project “Atlas of the SDGs in Bolivia at the municipal level” that is currently carried out by the Sustainable Development Solutions Network (SDSN) in Bolivia, of which CIS is a member.