The Influence of Language on Human and Economic Development in Bolivia 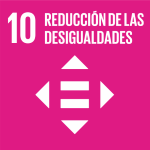 In 2009, Bolivia established 36 official native languages besides Spanish. According to Ethnologue’s Expanded Graded Intergenerational Scale, thirteen of these languages are threatened or shifting (2); twelve are moribund, nearly extinct or dormant (3); two have 8 and 83 speakers respectively (4); and one did not register any speaker during the 2012 Population Census (5).

While Spanish is the integrating national language, used in the cities, in media, and for almost all interaction with the government, more than 2.5 million people in Bolivia spoke a different language than Spanish as his/her main language (according to the 2012 Population Census). Most of these spoke either Quechua (1.4 million) or Aymara (0.9 million), but a minority spoke 63 other languages, including several foreign languages.

Map 1: Most spoken language in each Bolivian municipality, excluding Spanish, 2012 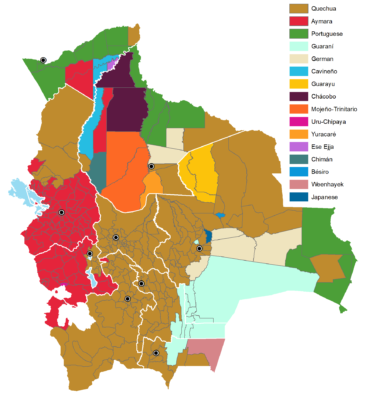 Source: Authors’ elaboration based on the 2012 Population Census.

The municipality with the most different languages spoken every day is Santa Cruz de la Sierra, where at least 49 different languages are spoken fluently (main language). This is followed by La Paz with 43 different first languages and Cochabamba with 42. This is of course due to a large number of diverse people dwelling in the main cities of Bolivia.

Language diversity is great. The problem arises if some of these people do not speak the main, integrating language, since they will, to a large extent, be excluded from participation in public life, except at a very local level. People who do not speak Spanish in Bolivia will have great trouble in school, trouble receiving basic services from the government, and trouble obtaining information about what is happening in Bolivia and beyond.

Therefore, for the upcoming Municipal Atlas of the SDGs in Bolivia, we think it is important to include an indicator showing the percentage of the population (3 years or older) who do not speak Spanish (7). This is an indicator of inequality of opportunity, which is why we have included it under SDG target 10.2 which is about promoting social, economic and political inclusion.

In 2012, on average about 9.7% of the Bolivian population (aged 3+) did not speak Spanish, but there is substantial variation between municipalities, ranging from a few percent in the main cities to more than half in several municipalities in Cochabamba and Potosí (see Map 2). 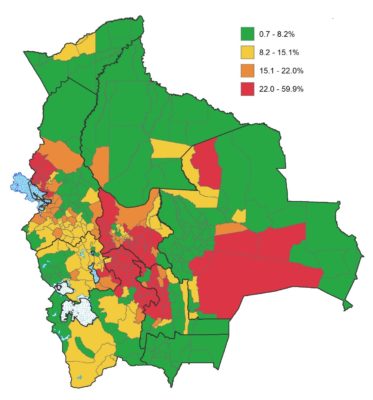 Source: Authors’ elaboration based on the 2012 Population Census.

Figure 1 shows a positive correlation between the share of people who do not speak Spanish in each municipality, and the level of Extreme Energy Poverty. While speaking Spanish does not assure low poverty, not speaking Spanish virtually guarantees very high levels of energy poverty. 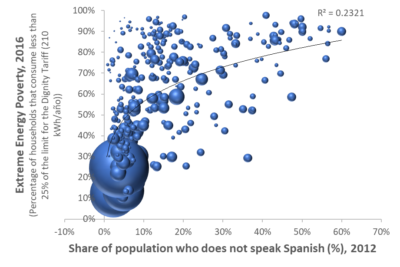 Source: Authors’ elaboration based on information from the 2012 Population Census and Andersen, Branisa and Calderón (2019).

While speaking Spanish is important for integration into national processes, speaking English facilitates representation and voice in global institutions (target 10.6) as well as collaboration on and access to global science, technology and innovation (target 17.6). We, therefore, suggest to include the percentage of the population aged 18 or more who speak English as another indicator in the Municipal Atlas of the SDGs in Bolivia. As shown in Figure 2, this indicator is inversely related to Extreme Energy Poverty at the municipal level. 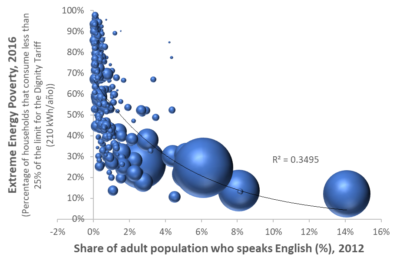 Source: Authors’ elaboration based on information from the 2012 Population Census and Andersen, Branisa and Calderón (2019).

Another language indicator that is frequently used as an explanatory variable in poverty studies in Bolivia is mother tongue (language in which you learned to speak). This is often used as a proxy for “indigenousness”, but it clearly covers many more aspects than the simple ability to communicate (e.g. culture and location). We feel that the two indicators proposed above (Percentage of population who does not speak Spanish, and Share of adult population who speaks English) constitute more precise indicators of exclusion and inclusion, with a clear path of causality.

(6) We used data from the 2012 Population Census to calculate the municipal level indicators presented in this article. Specifically, people are asked what languages they speak, and we use their first answer to determine the language they speak in on a daily basis.

(7) To determine whether people speak Spanish, we use not only the language in which they learned to speak, but also the first two languages they mention that they speak. This interpretation is generous, and does not necessarily mean that people can write an essay without errors, or interpret a complex text, but just that they can probably make themselves understood when interacting with doctors, teachers, bureaucrats and other people you need to communicate with to obtain public services.