Playing with fire in Santa Cruz 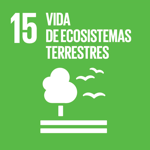 Currently there is a lot of speculation about the causes of the forest fires in the Amazon region. A Bolivian congressman, speculated that they probably originated in Brazil, while Brazil’s president Jair Bolsonaro claimed that NGOs have set fires to the forest to hurt his government. Many people in Bolivia have blamed the Supreme Decree 3973 of the 9th of July 2019, which authorizes controlled fires for agricultural purposes in Santa Cruz and Beni. The new meat export agreement signed with China is also a suspect.

In this blog we will present some empirical evidence to help improve the quality of speculation. For that purpose, we have analysed all the fires detected in the Department of Santa Cruz in Bolivia by NASA’s Visible Infrared Imaging Radiometer Suite (VIIRS) sensor between the 1st of January 2016 and the 28th of August 2019.

Most readers will surely be shocked by the sheer number of fires detected in the department: About 100,000 per year! In Table 1 we have cross-tabulated all detected fires[1] by year and type of area in which they were detected, according to the Departmental Land Use Plan (PLUS). About 59% were in areas designated for agropastoral use, but an astonishing 41% of all fires were in areas which were designated for forestry activities or protected areas, neither of which are supposed to have caught fire.

Source: Authors’ calculations based on data from NASA’s VIIRS sensor and the Departmental Land Use Plan (PLUS).

In this table 2019 does not look much different from previous years, but that is because we are still early in the burning season. If we graph the accumulated number of fires by date of the year, we see that this year clearly stands out (see Figure 1). 2016 was the previous worst year ever in Bolivia for both number of fires, extent of land burned, and area deforested, but 2019 looks set to beat those records easily. Just the first 28 days of this month saw more than 83 thousand fires in Santa Cruz. This is more than double the 36,591 fires detected during the same period in 2016. 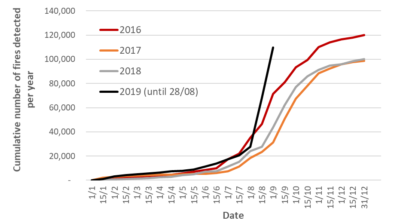 Source: Authors’ calculations based on data from NASA’s VIIRS sensor.

Figure 2: Location of fires in Santa Cruz, by distance to already deforested areas, 2016-2019 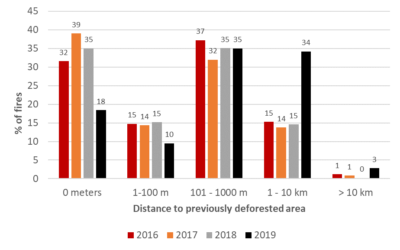 Burning of natural pastures is an ancient practice, which ranchers use to encourage the growth of fresh and tender grass for the cattle. However, we tabulated the number of fires in Santa Cruz by tree cover density in the year 2000, and found that so far this year, about 45% of fires have taken place in areas that used to have high tree cover like the “Cerrado Chiquitano” and “Cerrado Chaqueño” (between 61 and 90%) and 31% in areas that used to have very dense tree cover, more similar to the “Chiquitano Forest” (91-100%).

While there may be a few fires caused by a fluke accident (such as a burning cigarette or a camp fire left by an irresponsible tourist), it is safe to suppose that by far the most likely culprits are the hundreds of thousands of farmers intentionally setting fire to the vegetation in Santa Cruz every year to prepare for the next agricultural season. The dramatic increase in fires just this last month suggests that the Supreme Decree and the meat export opportunities to China have indeed encouraged farmers to clear land more aggressively this year.

[1] We excluded all low-confidence observations from the analysis, as these might reflect glares from metal roofs or cars rather than actual fires.