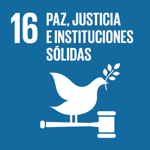 It is difficult to find good information about SDG 16: Peace, justice and strong institutions at the municipal level in Bolivia. However, UDAPE recently published a very helpful Fiscal Atlas. Specifically, the indicator that measures Budget Execution helps us understand how each of the municipalities is doing with regard to goal 16.6: Develop effective, accountable and transparent institutions at all levels. Municipalities with low Budget Execution capabilities are clearly not operating at their best, given that not even the low annual budget assigned to them by their Annual Operating Plan (POA) is fully spent/invested. This suggests a lack of management capabilities at the local level, which will probably hinder their capacity to achieve the Sustainable Development Goals.

The same graph shows the amplitude of capacities among a variety of municipalities. The best performing municipality executed 94% of the budget, but the worst performing only 15%. In general, municipalities with larger populations tend to have a better Budget Execution capability, while municipalities with low Budget Execution capabilities all have small populations. In 2017, Puerto Siles, with less than 1000 inhabitants, executed only 15% of its annual assigned budget, not even reaching the end of February in terms of annual expenditure. Trinidad, on the other hand, spent its assigned budget for the year up to early December in 2017. The two municipalities represent the extremes, but the variability in the effective use of financial resources between the remaining 337 municipalities is very high.

Source: Own elaboration based on data from the Fiscal Atlas of UDAPE.

Source: Own elaboration based on data from the Fiscal Atlas of UDAPE.

Graph 2 shows a negative relationship between Budget Execution and Extreme Energy Poverty (1). The correlation is not strong (ρ = -0.31), but it probably reflects a vicious cycle between poverty and local management capabilities.

It is also evident from the size of the bubbles that all municipalities with low Budget Execution capabilities are small and very poor. For those reasons, young people tend to leave these municipalities, which therefore tend to become even smaller over time.

(1) A previous article describes how Extreme Energy Poverty is measured