Measuring energy poverty and inequality at the municipal level in Bolivia 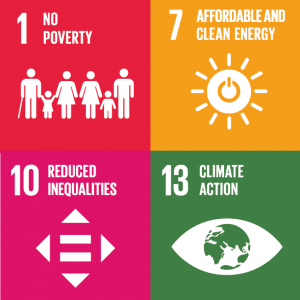 Energy consumption is closely related to income levels. The more readily usable energy and the more efficient energy converting technologies are available, the better are the conditions for the development of individuals, households, communities, the society and the economy (i). Electricity is one of the most useful and versatile energy forms available. It can be used for both heating and cooling, for producing light and sound, for running a wide variety of appliances, machinery, and vehicles, and even for creating money (e.g. bitcoins require huge amounts of electricity).

For these reasons, household electricity consumption is an excellent indicator of household income levels. Households with no access to electricity are almost certainly living in extreme poverty, with no basic household appliances, such as light bulbs and refrigerators, nor access to modern means of information and communication. When households get access to electricity, the first electrical appliances they obtain are usually a few light bulbs and a cell phone. If they can afford it, they will also add other items such as a radio and a refrigerator. If they have a bit more money, they might add a TV, a microwave oven, an iron, a shower heater and perhaps a computer. In general, the more appliances they can afford, the more electricity they will consume, so electricity consumption is a very good proxy for household income.

Indeed, one could even argue that electricity consumption is probably a better proxy for household income than reported household income itself. Reported household income suffers from a number of important problems, especially in countries like Bolivia with high levels of informality and self-employment. Most people don’t actually know how much they earned last month, and even if they did, they might be tempted to underreport it, or it might not be typical for the whole year. In contrast, electricity consumption is a hard, and relatively stable, number that is getting registered every month for every household with electricity access, at least in countries where electricity theft is not widespread.

For example, you can calculate the level of inequality within each municipality, which has never been done before in Bolivia. The Centre for Social Research (CIS) of the Bolivian Vice-presidency is currently sponsoring a research project to do just that. The idea is very simple. In every municipality you use the electricity consumption data from every domestic electricity meter and add zero consumption observations for the households which do not have access to electricity, and then you plot the Lorenz curve and calculate a Gini coefficient (ii).

That would yield something like what is shown in Figure 1. To the left is the Lorenz curve and the Gini coefficient for a big urban municipality where everybody has access to electricity (although, surprisingly, more than 20% didn’t consume any electricity in the month of the reading (May 2016), so the homes appear to be uninhabited at the time of measurement). To the right are the Lorenz curve and Gini coefficient for a poor rural municipality with low electricity coverage and low consumption for the ones that actually do have access to the electricity grid. 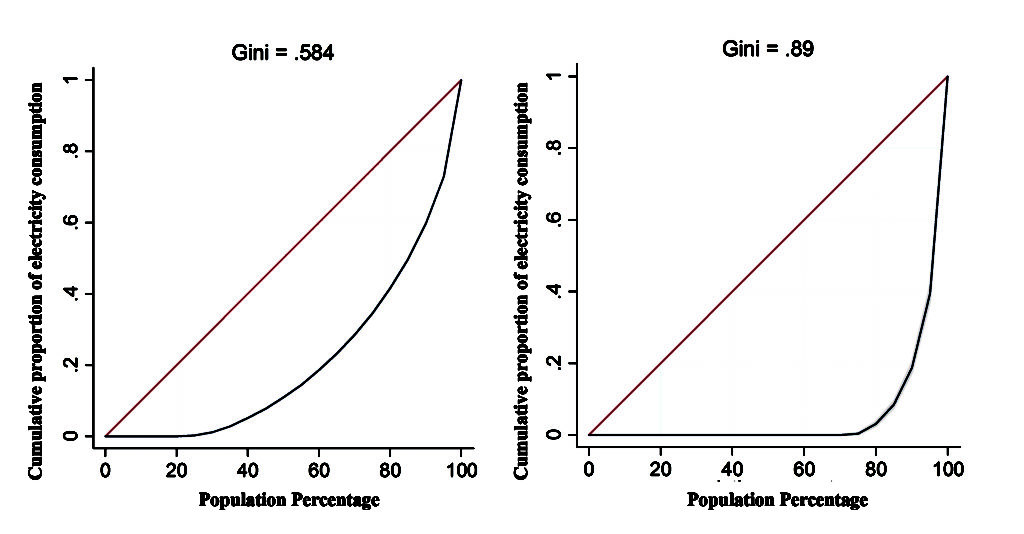 Electricity meters would be an ideal source of data for inequality and poverty indicators at the municipal level, except for a few practical problems. First of all, we do not know how many people are associated with each electricity meter. It is quite possible that the observations with 0 or very low energy consumption involve few inhabitants or inhabitants who live there only part of the year. Thus, both Energy poverty and Energy inequality measured this way at the household level would be exaggerated compared to conventional population-based poverty and inequality measures. The exaggeration would be particularly strong in areas where many families have two homes and use one of them only infrequently. The data from the infrequently used home would wrongly indicate a very poor family, whereas it might, in reality, be reflecting the electricity consumption of a second home to a family that migrated from the rural area to one of the bigger cities. This family might not want to lose its affiliation to the community where the home is located (iii). However, as long as the bias is similar across the country, the ranking of municipalities should be similar (iv).

In the case of Bolivia, there is a second problem with the electricity consumption data, which is that some electricity distributors do not register the municipality of the electricity meter in their databases, and in some cases it is not even well-defined, because municipal borders themselves are not well-defined. This has been a main obstacle in the CIS research project, but we finally have managed to clean up the databases and reach some reasonably accurate data for the great majority of the Bolivian municipalities.

In the other corner of the figure (upper right), we find a large number of municipalities with extremely high levels of Energy Poverty and Energy Inequality. Fortunately, relatively few people live in these municipalities. The size of each bubble in Figure 2 reflects the number of households in each municipality. 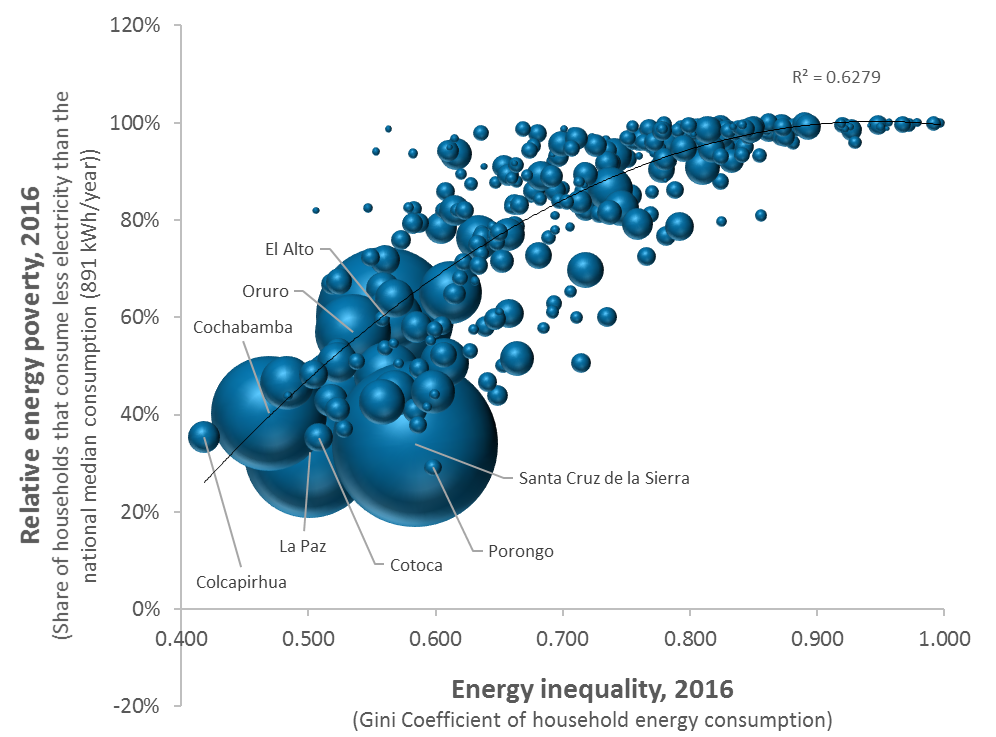 In addition to the Relative Energy Poverty rate we can also calculate an Extreme Energy Poverty rate, by calculating the percentage of households that consume less electricity than a bare minimum. We have chosen the bare minimum as the equivalent of a quarter of the limit for receiving the subsidized energy tariff (Tarifa Dignidad, which is 70 kWh per month). A quarter of that would allow a household to power a couple of light bulbs, a radio and a cell phone, but nothing more, so it is clearly a bare minimum.

Figure 3: Urbanization versus Extreme Energy Poverty in Bolivia, 2016, by municipality 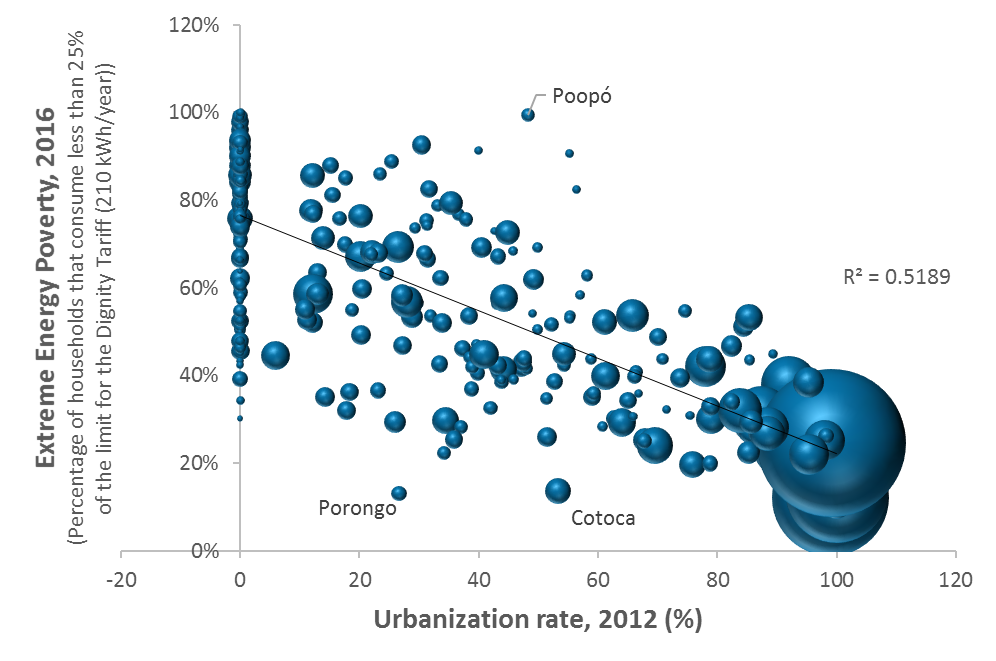 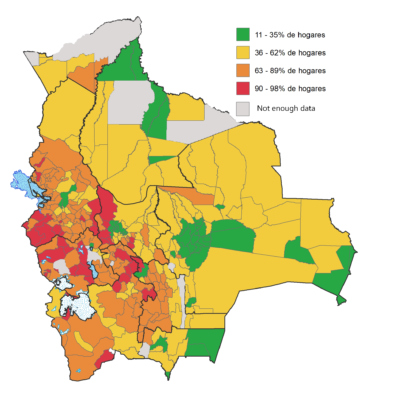 Through this CIS sponsored research project, the following municipal level indicators are being developed for potential inclusion in the Atlas of the SDGs in Bolivia at the municipal level:

The viewpoints expressed in the blog are the responsibility of the authors and do not necessarily reflect the position of their institutions. These posts are part of the project “Atlas of the SDGs in Bolivia at the municipal level” that is currently carried out by the Sustainable Development Solutions Network (SDSN) in Bolivia, of which both iDEC and CIS are members.

(iii) Law N°1715 of 1996, regulating the National Service of Agrarian Reform and Law N° 3545 of 2006, regulating the Community based Reconduction of the Agrarian Reform both guarantee the use and enjoyment of the agrarian property; however, they do not guarantee the free disposal of those lands. The endowment of agrarian property is tailored to benefit peasant communities and indigenous and, so-called, Originary communities. According to these laws, it is not possible to title agrarian property that is smaller than a “small property”. This prohibits owners of small parcels of land in the rural area to sell their lands if they so wanted. They are only allowed to transfer it to other members of their family by means of inheritance, therefore establishing a strong and almost unbreakable link between the rural community and the individual. This has an “eternal return” effect on the rural migrant who is bound to keep strong ties with his/her community through the land they inherited. This phenomenon is especially perceived in Bolivia’s high lands, where the amount of peasant communities and indigenous and Originary communities is larger.

(iv) In Bolivia, seasonal migration is common in many rural municipalities where the climate does not support agriculture all year round.